In 2020, an investigator will need to be skilled in ESI to succeed in the industry. All aspects of personal and business activity and transactions are becoming controlled by ESI. Let’s take a look at a few examples. The most important fact for investigators to be aware of in the next 3 – 5 years is that there will be a significant difference in understanding of ESI between different people in the marketplace. This creates a huge opportunity for investigators who are experts in this area to create value for their clients cases.

Criminal Defense – This first example demonstrates that clearly. In this case, it appears that a state-sponsored conspiracy may have been in place to set up a high profile individual to be arrested to thwart his political ambitions.  the target was Dominique Strauss-Kahn, then head of the International Monetary Fund and leading contender to unseat

Nicolas Sarkozy as president of France in the April 2012 elections. The team who executed this scheme would likely posses above average tactical skills. I the end however, the worst case scenario for the target was defeated by ESI. In one of the most high-profile cases in the news, the culpability of the alleged perpetrator is called into question by facts obtained from electronic records. Just a few years ago, this exculpatory evidence may not have been readily available, and the prospects for the subject might be different. In this case, it is also important to recognize that

DSK was alerted to the potential problem when it appeared his Blackberry was compromised. Private text messages he sent ended up in the hands of the political party headquarters for his opponent. As we now know, he ended up being arrested for sexual assault in New York City based on the allegations of a maid at a hotel. The charges were later dismissed, but it turns out the investigation discovered a more serious set of inconsistencies between individual statements and electronic records. The story describes how text message records, hotel key-swipe time stamps, security camera video, and travel information was extracted, and compared with witness statements. In one instance, a cell phone record was discovered where a member of the hotel security team was communicating with the security detail of the French President Sarkozy, the political rival of DSK. Another email was discovered where Colonel Thierry Bourret, the head of an environment and public health agency, claimed credit for “bringing down” DSK. Later, a security camera digital record found the hotel security man and another person high-fiving each other after the victim reported to her supervisor. It was also discovered that another Blackberry owned by the target had its GPS circuitry defeated preventing the phone from sending out signals identifying its location. For a phone to be disabled in this way, according to a forensic expert, required technical knowledge about how the BlackBerry worked.

In the end, the criminal charges were dropped, but the political future of DSK was damaged, possibly for good. The takeaway for investigators is that the understanding of ESI records is inconsistent, even within the security industry.

Online Life Indistinguishable From “Real” Life – Of course, Facebook investigation is a hot subject. various seminars and courses are on the market presenting methods of doing investigation within social networks. The question

of online activity vs. real world activity is important enough for courts to begin issuing opinions on the subject. The opening paragraph of a case decided last week begins as follows:

The question being argued was a claim made that the court should compel a party to divulge their Facebook password to the opposing party for discovery of posts and photos in the Facebook account. The case involved a personal injury claim where the injured parties allege serious injuries as a result of an auto accident. The opposing party requested the Facebook information claiming a good faith belief that it would be relevant to the defense of the injury claims. Defendant says that certain posts on the injured parties Facebook account contradict her claims of serious and severe injury, Specifically, Rosko claims that Largent had posted several photographs that show her enjoying life with her family and a status update about going to the gym. After considering privacy and priviledge arguments, the court ruled on November 7th 2011 as follows:

IT IS HEREBY ORDERED that Defendant’s Motion to Compel be, and hereby is, GRANTED.
IT IS FURTHER ORDERED that Plaintiff Jennifer Largent shall turn over to Defense counsel her Facebook username email and password within 14 days of the date of this Order. Plaintiff shall not delete or otherwise erase any information on her Facebook account.

Investigators should be continually aware of cases such as this, and the developing case law regarding electronic information. 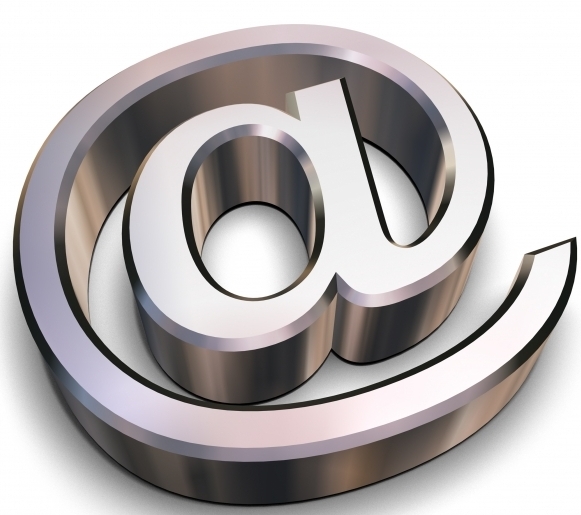 documents. In this article, one adaptive viewpoint considers the consequences of the E-SIGN law combined with email engagements. “In determining whether an e-mail or e-mails formed a contract, courts scrutinize whether the e-mail contains the essential terms, whether it shows a final offer and acceptance with the intent to be bound and not merely a continuing negotiation, and whether it comes from the party to be charged.”

“When composing or responding to e-mails, it is important to consider whether the e-mail or a series of e-mails could be construed as forming a contract – specifically, whether such e-mails contain an offer or acceptance with the intent to be bound and the essential terms described above and whether a typed signature, including just the automatic signature block, appears at the end of the e-mail. Policies and practices emphasizing the use of contingencies and qualifiers in e-mails can prevent the creation of unintentional contracts.”

Liability Documentation – Withing the infamous Penn State assault case, internal emails could be damaging evidence of an ongoing concealment of activity. The extent of liability to third parties beyond the perpetrator could hinge on this electronic information. According to the Wall Street Journal article, an Aug. 12, 2005, email to Pennsylvania State University President Graham Spanier and others, Vicky Triponey, the university’s standards and conduct officer, complained that Mr. Paterno believed she should have “no interest, (or business) holding our football players accountable to our community standards. The Coach is insistent he knows best how to discipline his players…

The confrontations came to a head in 2007, according to one former school official, when six football players were charged by police for forcing their way into a campus apartment that April and beating up several students, one of them severely. That September, following a tense meeting with Mr. Paterno over the case, she resigned her post, saying at the time she left because of “philosophical differences.” Dr. Triponey said: “There were numerous meetings and discussions 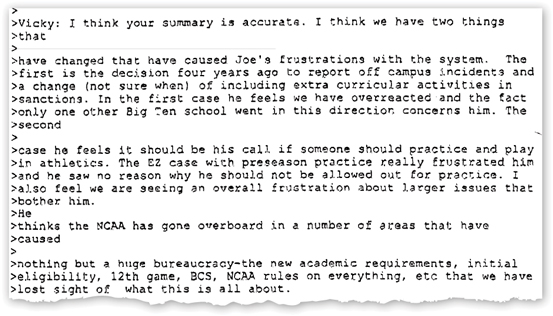 about specific and pending student discipline cases that involved football players,” which she said included “demands” to adjust the judicial process for football players. The end result, she said, was that football players were treated “more favorably than other students accused of violating the community standards as defined by the student code of conduct.”

In this case the difference is that the he-said she-said controversy is documented by email records and other ESI. Dr. Triponey sent an email to Messrs. Spanier, Curley and Puzycki summarizing the meeting and sharing her thoughts and concerns. In the email, which was reviewed by The Wall Street Journal, she said that football players were getting in trouble at a “disproportionate rate” from other students, often for serious acts. She said her staff had tried to work with the athletic department, sometimes sharing information, but that whenever her department initiated an investigation into a football player, the phones lit up. “The calls and pleas from coaches, Board members, and others when we are considering a case are, indeed, putting us in a position that does treat football players differently and with greater privilege.”

As it can be seen, every type of investigative case will be impacted by electronic information. In fact, most of the intelligence gathered by investigators in the coming years will derive from ESI. The CIA and State Department are concerned that terrorists might be using the communication features of online gaming such as Second Life to exchange messages. Astute fraud investigators recognize that even deleted voice mail messages may remain in backup tapes of company servers.

As more of the valuable intel from a case will come from electronic information in the future, investigators will need to develop skills to obtain and analyze this information.